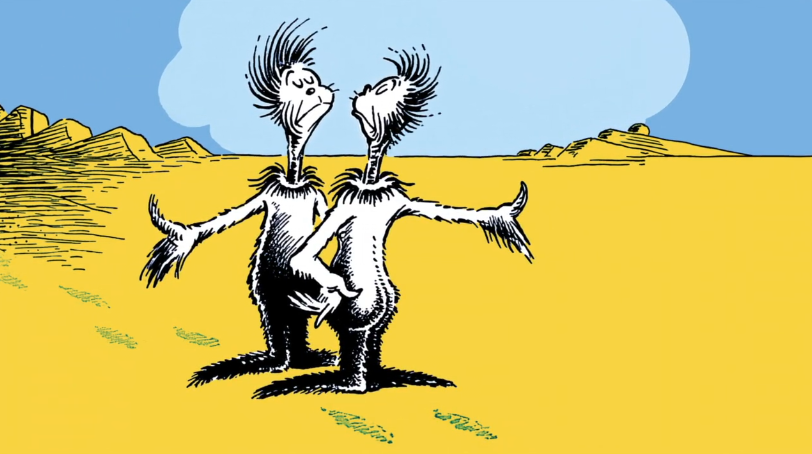 Dr. Seuss (real name Theodor Geisel) is one of the best-known writers for children. He died in 1991, but his books remain extremely popular. Publishers Weekly has a fascinating story about him, his work and copyright. One part concerns a five-year-long legal dispute between ComicMix, a publisher with a Web site about comics, and Dr. Seuss Enterprises, the holding company for the author’s works.

In September 2016, ComicMix launched a Kickstarter to raise funds for Oh, the Places You’ll Boldly Go! written by David Gerrold (pen name of David Jerrold Friedman) and illustrated by Ty Templeton. A Seuss-Star Trek mash-up, the book featured Star Trek-uniform clad characters seen in Seuss’s Oh, the Places You’ll Go! (“Go!”), How the Grinch Stole Christmas!, and The Sneetches and Other Stories (“Sneetches”) along with text in rhyming tetrameter, Dr. Seuss’s signature style.

Dr. Seuss Enterprises sued, alleging “copyright and trademark infringement and unfair competition”. In 2017, a court found that the book was a “literary and pictorial mash-up,” and “no doubt transformative.” Another judge found that the book did not violate trademark law. Dr. Seuss Enterprises appealed, and in 2020, the US Court of Appeals for the Ninth Circuit overturned the lower court’s decision, finding that the new work was neither transformative nor a parody. In 2021, the companies settled the suit, with “ComicMix agreeing that Boldly infringed on copyright and Seuss agreeing to drop any claims for damages and attorney fees” according to Publishers Weekly.

That’s regrettable, since it is clear that the proposed book “Oh, the Places You’ll Boldly Go!” was truly original in its mashup of disparate and even clashing elements. It was creative in the best sense of the word, but killed by copyright’s steely inflexibility. More generally, the decision is bad news for all the millions of children and adults who have read and will read the books of Dr. Seuss, since it means they can’t build on his legacy, however inspired they may feel by his works.

The Publishers Weekly story also reports that the same ComicMix company is launching another Kickstarter campaign, to fund the publication of “The Zaks and Other Lost Stories by Theodor Geisel“. The background is interesting:

The ComicMix edition of the stories was created with high-quality scans from the original Redbook stories, tracked down from collectors of the magazine. Redbook reverted the copyright to these stories to Geisel, but the copyright was not renewed, so the versions that appeared in the magazines are now in public domain.

That seems to imply that ComicMix is on firmer ground producing a modern edition than it was on producing the more imaginative “Oh, the Places You’ll Boldly Go!”. It could also suggest that Geisel himself was not obsessed with copyright and ownership, unlike far too many companies who own the rights to authors’ works after their deaths.

Back in April, Walled Culture wrote about Ed Sheeran’s victory